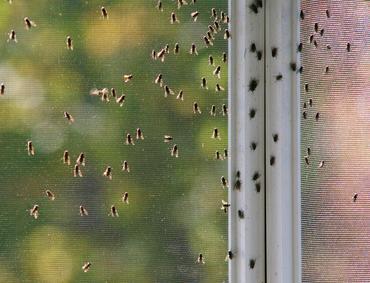 Flies are everywhere in the UK, with some species being more common than others; their numbers also increases and decline at certain times of the year. Likewise, their numbers can swell and swarm when the weather is in their favour or they have access to a ready food source.

The average house fly lives for around 30 days, completing a 4 stage life cycle, starting with the adult fly laying an egg, followed by the larvae, then pupae before forming in to the adult –and the whole cycle starts again.

Flies themselves do not present a danger to human health, but landing on food, chewing it, regurgitating it and also defecating on it, can mean that bacteria is passed on to humans and can make us ill.

This, coupled with the high nuisance factor a fly infestation can have on a home or business premises, it pays to know which fly is causing you bother… 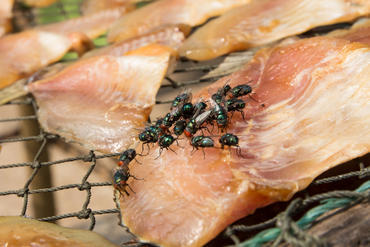 Also known in some areas as the Blow Fly, it is best-known for hovering around dustbins, Attracted to pet faeces and dead animals, these are the pesky insects that spread disease. Easily spotted by their iridescent blue colour, they are everyone’s pet hate. Up to half an inch in length, they can take between 7 and 12 days to mature from egg to adult, with eggs hatching within 18 hours.

Can be a problem – they can be where there is a lot of dog fouling, as well as open bins. Cleaning up dog mess and ensuring that rotting or composting food is in an air tight container, and rubbish is bins with lids or tied securely in bags, immediately decrease their numbers.

Commonly found in quiet, undisturbed areas of the home, such as attics and voids in walls, they look for warm places to hibernate over winter. Attracted to light, they can often be seen clustering around windows on sunny days. Smaller than the blue bottle, they have are sluggish flight and dark in colour. Unlike the blue bottle, they also lay their eggs in soil in later summer, with their larvae developing in their earthworm host. From egg to adult, the whole process takes between 27 and 39 days (warmth can speed up the process).

Can be a problem – when they find a crevice in a warm building in which they can safely hibernate over winter; with a ready food source, the hatching eggs can go on to cause more a swarm. Professional pest controllers can effectively deal with these flies.

Next to the blue bottle fly, this must be the most hated flying insect, simply because they carry disease and can soon infest all kinds of premises. They are also attracted to all kinds of food, from human food to pet food, animal feeds, rotting waste and faeces. Seeing house flies in numbers may indicate there is a problem close by…

The speed of their breeding is what causes problems, with eggs laid in batches of 120 to 150 a time, they hatch within 72 hours. This larvae can then take anything from 3 to 60 days to hatch, with the pupae hatching within a month. Problems occur due to the capacity and sheer numbers in which the house fly breeds.

Can be a problem – their numbers make them an almost instant problem and with a ready, ripe food supply nearby they can become an instant issue for many households in North Lincolnshire.

There are many other kinds of flies that can cause problems for many households and commercial customers, from lacewings to fruit flies, crane flies and more.

Often, eradication includes treating the flies themselves as well as taking steps to prevent problems in the future too. Call in the professionals and be fly-free in no time!