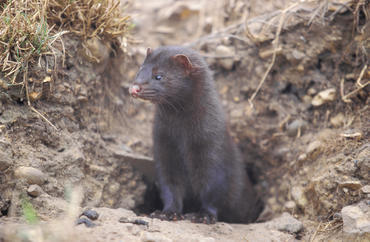 Of all the pests that we deal with, there is only one that these four words describe – the mink.

Minks are not native to the UK. Brought to the UK in 1929 for ‘fur farms’, the minks we see in the wild today are direct descendants of escapee minks from the farms or, as happen frequently, from minks illegally released in to the wild.

Often mistaken for weasels, minks are medium-sized and dark in colour, they spend the vast majority of their time in their dens, eating, sleeping and grooming. But, whilst they look harmless enough, they hold a particular problem for the native water vole.

Numbers of water voles in the UK have been virtually wiped out by the mink, an effective predator that can follow the water vole into its natural habitat, the tunnel. Opportunist in nature, minks will often kill more than they can carry away too.

Minks, despite their glossy dark brown appearance are considered to be major predators, causing damage to the natural eco system; their numbers need to be controlled, preferably eradicated and so, if you believe you have mink on your land, then effective control and management is essential – something only a professional pest controller can truly provide. 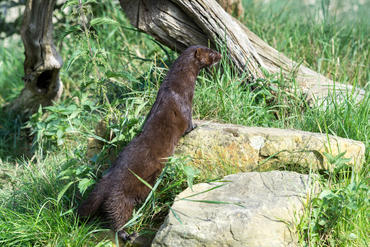 Populating every river system across the UK, mink are easily recognisable; they have long bodies, short legs and a bushy tail, with a pointed head and small, round ears. Females are slightly smaller than the males which can grow to up to 70cm in length. Normally chocolate brown in colour, they can sometimes appears black but normally have a small white patch under the chin, chest and belly.

Minks mate between February and April each year, with around 6 young per litter after a gestation period of 30 days. The mink kids are born deaf, blind and hairless but grow quickly, weaned and raring to go by 8 weeks of age. Remaining with their mother through the summer months, the young leave to find their own territory in the autumn.

Where will you find them?

Minks are across the UK and you will find them close to water. They eat fish, eels and crayfish and are also able to climb trees to take small birds from nests etc. A common sight in some areas of the country side, they are also seen in watercourses and rivers close in towns and cities too.

Supremely confident, they show very little fear of humans; they are excellent at defending themselves and their ability to swim also means that small islands, havens for various birds, flora and fauna are not immune from mink. Fiercely competitive over their territory, male and female mink will defend their patch vigorously.

The problem with minks

Solitary and nocturnal, mink can be seen during the day but they present a very real threat to our countryside. Fast and agile carnivores, they will eat anything they can catch and kill, from fish, birds, rabbits, mice, rats, eels and crayfish BUT, they will also kill poultry but until the fox, they will kill everything in the henhouse, even if they cannot eat it.

Ground nesting birds and the native water vole have all fallen prey to the mink and this is way the eradication of mink is so important to the British countryside.

How to eradicate mink

Using the professional services of a pest control company is the best way forward.

Mink are trapped in humane traps. Preferably using live capture traps so that the pest controller can check that they have trapped the right animal, once trapped is it illegal for mink to be released back in o the wild.

Hiring a professional pest controller will mean that you tap into years of specialist knowledge and experience;

If you suspect that you have minks causing a nuisance on your land – killing whole houses of hens, for example – the best course of action is to contact Pest Stoppers!